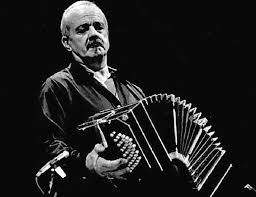 When I showed up for my daily 12 hour shift at Nightstage on August 25 1987 I had no idea what I was about to experience. I hired fellow sound person Myrna Johnston to bring in more equipment for monitor mix and got ready for the band. When the 5 distinguished gentlemen arrived, set up on stage and started playing I was totally blown away. I had never heard anything like it, their music was intricate, fascinating, emotional and above all beautiful. I have been a fan ever since. Those four shows on those two nights are probably the best shows I've ever experienced. I went to see the band at some other venue the following year in Boston and that was the last time I got to hear Astor Piazzolla before he died in 1992. I remember the band bickering over details during sound check, try'n to better their performance and I was impressed by their dedication to improve even after all those years of playing together. The icing on the cake for me during the end of the last show was Astor announcing on mic, " I think it's the best sound on all my tour".