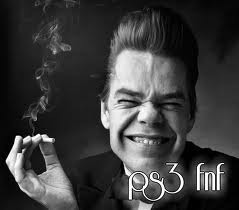 There is nothing wrong with a real song and dance man! Not that Buster danced much, but he moved, his mind raced and his lips followed suit. His band was great and the audience absolutely loved this guy. I even made a point of bringing my mum to one of the shows as I knew she would love it as much as me.
I remember doing several shows with the Banshees of Blue and with just one monitor mix for horns, piano, vocals, etc it was a challange, but it worked.
Unfortunatley time has run its toll on this old cassette and a few minutes of the top are ruined, maybe the NYC flu that he mentions he and the band brought with them got to it, hell, I don't know, but I just wound the tape forward to some playable spot and ripped it.


The band included these people but I can't make out the piano player??? The horn section is still around as The Uptown Horns.

The most famous of the lot is of course the bass player Tony Garnier who went on to become a long standing sideman with Bob Dylan.