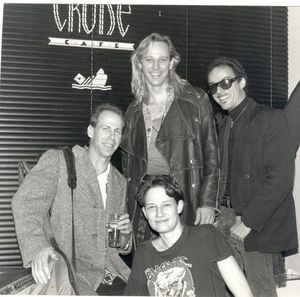 The Tailgators with house DJ Devo

The Tailgators were the perfect band for Cruise coming from Austin and all..., I don't know how many times they played there but they were always a favorite band for the local crowd of Texans. The Tailgators were so LOUD that they drove people to drink and created a party atmosphere everytime...on this tape I can hear the cymbals constantly almost driving the vocal mic into a shreiking feedback and the band leader Don asking me to crank up the monitors until they started feeding back.. ouch! Don was a very easy going and a genuine nice guy, the bass player Keith Ferguson of The Fabulous Thunderbird's fame is no longer around but I believe the drummer Gary Smith is still touring with the band